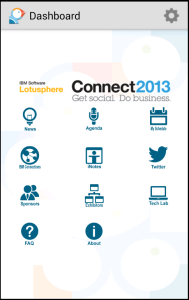 Computer Architechs International Corporation (CAI) once again delivered Social Business Online 2013, an online conference system that allows conference attendees to get the most out of their conference experience, at IBM Connect and Lotusphere 2013.

Social Business Online 2013 was made available to attendees of IBM’s social business conferences, IBM Connect and Lotusphere 2013, from the beginning of January 2013 until mid-February, 2013. This online tool was an updated and improved version of the tool used at IBM Connect and Lotusphere 2012. Social Business Online 2013 continued to be a powerful source of information that enhanced the conference experience for attendees by allowing them to “get social” and “go mobile” when creating their conference schedules, networking and chatting instantly with other attendees, setting status updates, acting on social recommendations, interacting with Twitter feeds, creating profiles, participating in communities and forums, creating wikis, sharing favorite bookmarks, microblogging and so much more.

Social Business Online leveraged the power of XPages seamlessly integrated with many of IBM’s social collaboration and mobile tools including IBM Connections 4 and IBM Sametime 8.5.2. It allowed users to experience Social Business for themselves from almost anywhere an Internet connection was available. In fact, the online conference system was made accessible from almost any mobile device. New for 2013 was the chance for attendees to experience the newly announced Connections Mail feature where users could interact with their conference mail account right from inside the IBM Connections interface. 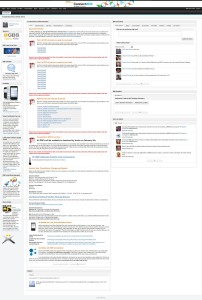 Besides the full online conference system, accessible by the most popular browsers, users had access to a mobile version of the site from advanced mobile devices with smaller screens. Users who didn’t sport a tablet or smartphone could still mobilize by accessing the Mobile Lite site, which supported most Internet-connected mobile phones with less advanced browsers.

In addition, CAI also provided an enhanced version of the native conference agenda applications for the Apple iOS and Google Android. These applications allowed users to download the conference agenda right to their devices, search, view and schedule sessions, and also synchronize their schedules with their accounts on the Social Business Online 2013 site. 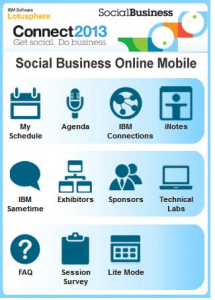 If users were carrying more than one mobile device, the mobile apps also allowed synchronization of the Agenda and the attendee’s personal schedule among any number of mobile devices logged in from the same online account. Changes made to one mobile device’s agenda would easily sync up with the agenda on another device using the attendee’s conference account on the Social Business Online site’s servers as the central point for these synchronized requests. The mobile apps also gave attendees the unique ability to view and schedule sessions while offline and then, with a click of a button, sync their schedules and the agenda with their conference accounts.

The attendee’s schedule could also be synchronized to users’ own mobile calendars with Apple iOS, Google Android, Nokia SymbianOS, Microsoft Windows Mobile, Microsoft Windows Phone, and Blackberry 10 devices via the site’s Lotus Notes Traveler servers. Finally, if that wasn’t enough mobile support already, a user’s schedule could also be exported as an iCal file to be imported into any calendar application that supported the iCalendar standard.

All product and service names mentioned herein are the trademarks of their respective owners.